The complete introduction to React spring

Hey, are you keen on discovering new possibilities with Hooke’s Law? Remember the following image that tells us how elasticity works? 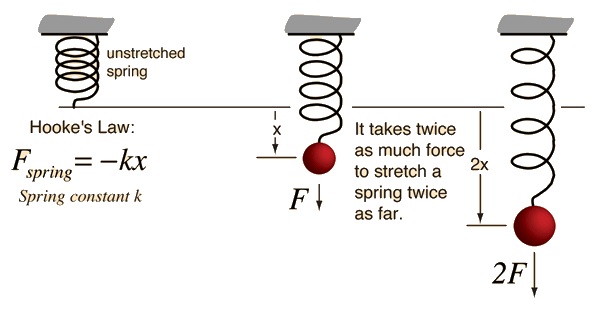 Well, I’m not a Physics professor who introduce you to the world of how springs and hooks work, but I can show you how to achieve the same level of flexiblity on a React-based application through React Spring.

What is React Spring?

React Spring is a spring-physics based animation library that gives all the necessary tools to make simple, yet powerful, animations and interactions via the different interpolations and transitions provided to us.

Before we start coding, let’s take a moment to appreciate Physics.

The term ‘spring’ is heavily involved with the React Spring library.

The following forces are applied to a spring attached to a certain point (A):

In the same fashion, we can describe a spring in React Spring library as something that:

Does NOT have a defined curve or a set duration.

Hence, all the animations are done in terms of time and curves. This is where React Spring comes into play.

Typically, we would have normal @keyframes animations in CSS that basically deal with time-based animation. Here, due to nature-inspired easing, the animations feel more natural.

What we’ll be making

Let’s spring it on!

After you’ve created a new React project, open up your terminal window and run the following command:

This should install all the necessary files related to the library.

Create a new file under the src/ folder of your project called Toggle.jsx.

Start with the usual stuff, like exporting the component and returning the div container, which has two children: the <h1> heading, “Hello” and next to the <button> “Toggle.”

Nothing fancy here; so, let’s add the ‘fancy’.

We’ll be using the useState Hook in order to handle the state of our toggle. Start by importing it and giving it the isToggled state variable. The initial value of the state should be set to false as we don’t want the toggle state to show at first.

Next, to start using React Spring, we need to import the useSpring hook. This turns the normal value of an element into an animated-value.

Let’s name our animation, fade. Inside the useSpring hook object, we’ll define all the animations we need. As you can see in the demo above, when the toggle button is clicked, the text changes,

As shown in the documentation, the useSpring hook takes in various properties like a normal CSS code. However, here we have a React Hook; so, we will pass the color, transform, and fontSize properties (notice the change in syntax compared to CSS) with the isToggled variable.

If the toggle has not changed its state, then the color would be #000; but, when it does change (when the button is pressed), we set it to green.

The same goes for the other two properties we want to animate:

Okay, but we still haven’t written the <button> functionality! Let’s write it.

We need to add an onClick event that passes in the .

For the final part, we will use the animated prop provided by the library (make sure that you import it). We are going to add this prop to whichever element we want to animate. Here, by clicking the “Toggle” button, we want to animate the heading so, we change the tag from <h1> to <animated.h1>.

Finally, go back to the App.js file and return the newly created component. You can also add some styling if you like.

As soon as you do this, you can play with your newly created spring animation! Notice that you didn’t have to care about the easing!

How about we move ahead and make this?

Looks exciting, right? It’s somewhat complex, though. Here’s what we need to do:

We’ll write the code inside App.js itself. Begin by importing the library:

Inside the return() method, we have a single <animated.div /> that takes in two of React’s mouse synthetic events (onMouseMove and onMouseLeave) for the actions we need to perform. These take in the x and y coordinates inside the current viewport/container:

Here, we pass in the clientX and clientY to be calculated by the calcXY() function.

The calcXY function is a simple function that takes x and y as its arguments and uses DOM’s Window interface to get the respective width and height.

To set the value of xys as desired, we make a new global constant and use the perspective(), rotateX(), rotateY(), and scale() properties.

A function that takes either a function or an object that forms a range. Interpolations can also form chains that allow you to route one calculation into another or reuse them.

Now, it’s time for some more physics stuff. Inside useSpring(), we will first pass the default xys value (which simply translates to the X, Y, and Z coordinates in three dimensions). Then, using the config property, we can manually define how much mass, tension, and friction an element can have!

Exciting right? All of this is possible thanks to React Spring’s Common API. You can view all the examples and an interactive demo on their website.

As for the styling, it can be achieved quite easily with CSS:

I hope this cleared your basic understanding of how you can animate your components in React Spring. There are a lot of other possibilities with this library. You can check all the examples out here.

Thanks for reading, I appreciate it! Have a good day.