What is .NET MAUI?

Ace your System Design Interview and take your career to the next level. Learn to handle the design of applications like Netflix, Quora, Facebook, Uber, and many more in a 45-min interview. Learn the RESHADED framework for architecting web-scale applications by determining requirements, constraints, and assumptions before diving into a step-by-step design process.

Aloha! Welcome to .NET MAUI! The all-new .NET Multi-platform App UI (MAUI). As announced at Microsoft Build 2020, Microsoft has evolved Xamarin.Forms and taken the next step in the .NET unification to give you a cross-platform mobile-first framework for Android, iOS, macOS, and Windows. .NET MAUI will introduce new ways to build applications – available in .NET 6 and in preview now! 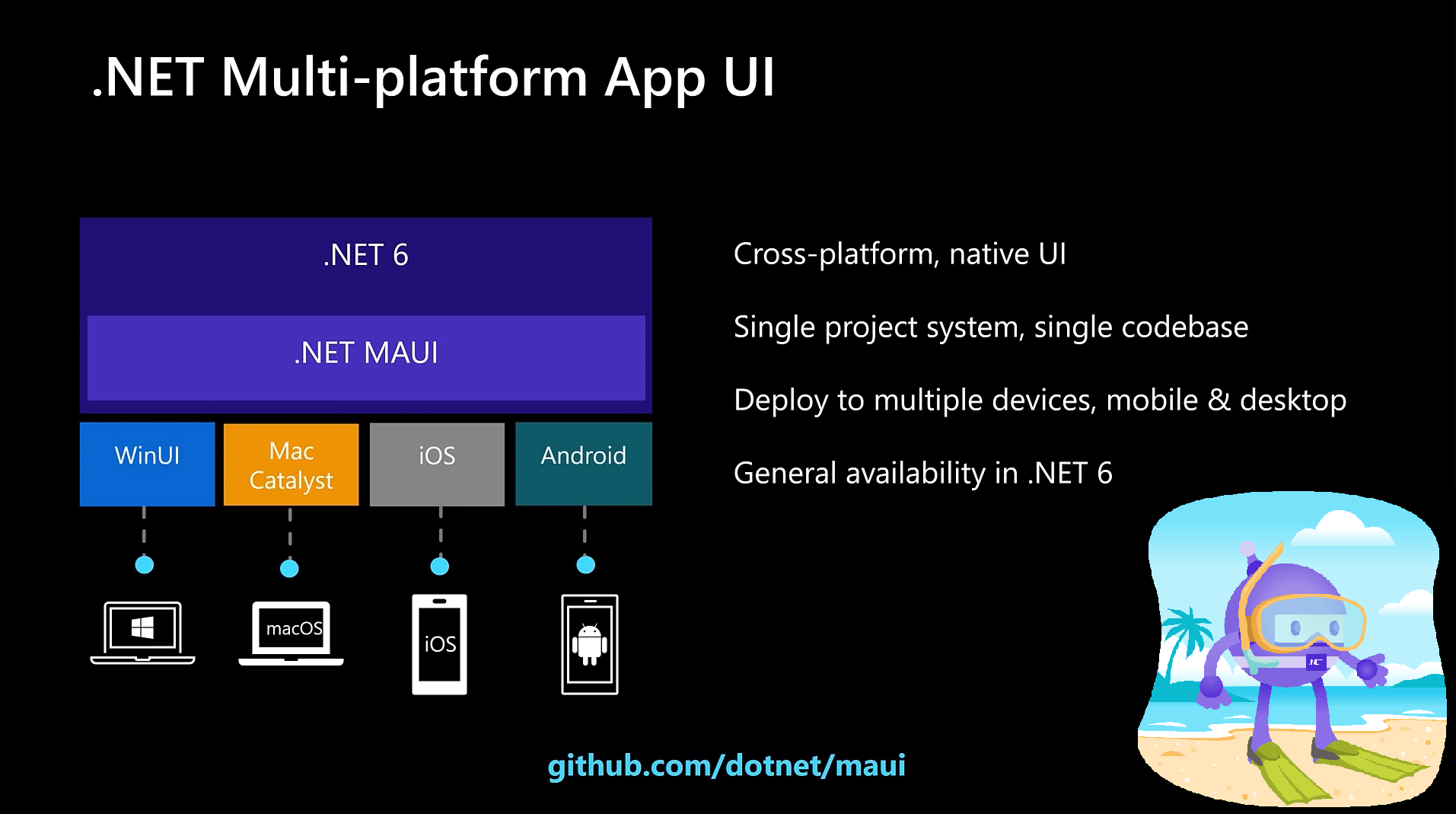 What is .NET MAUI?

.NET Multi-platform App UI (MAUI) is the evolution of Xamarin. Forms extended from mobile to desktop scenarios with UI controls rebuilt from the ground up for performance and extensibility. - Maddy Leger, Program Manager Xamarin/.NET MAUI Team.

What are Xamarin and Xamarin.Forms? 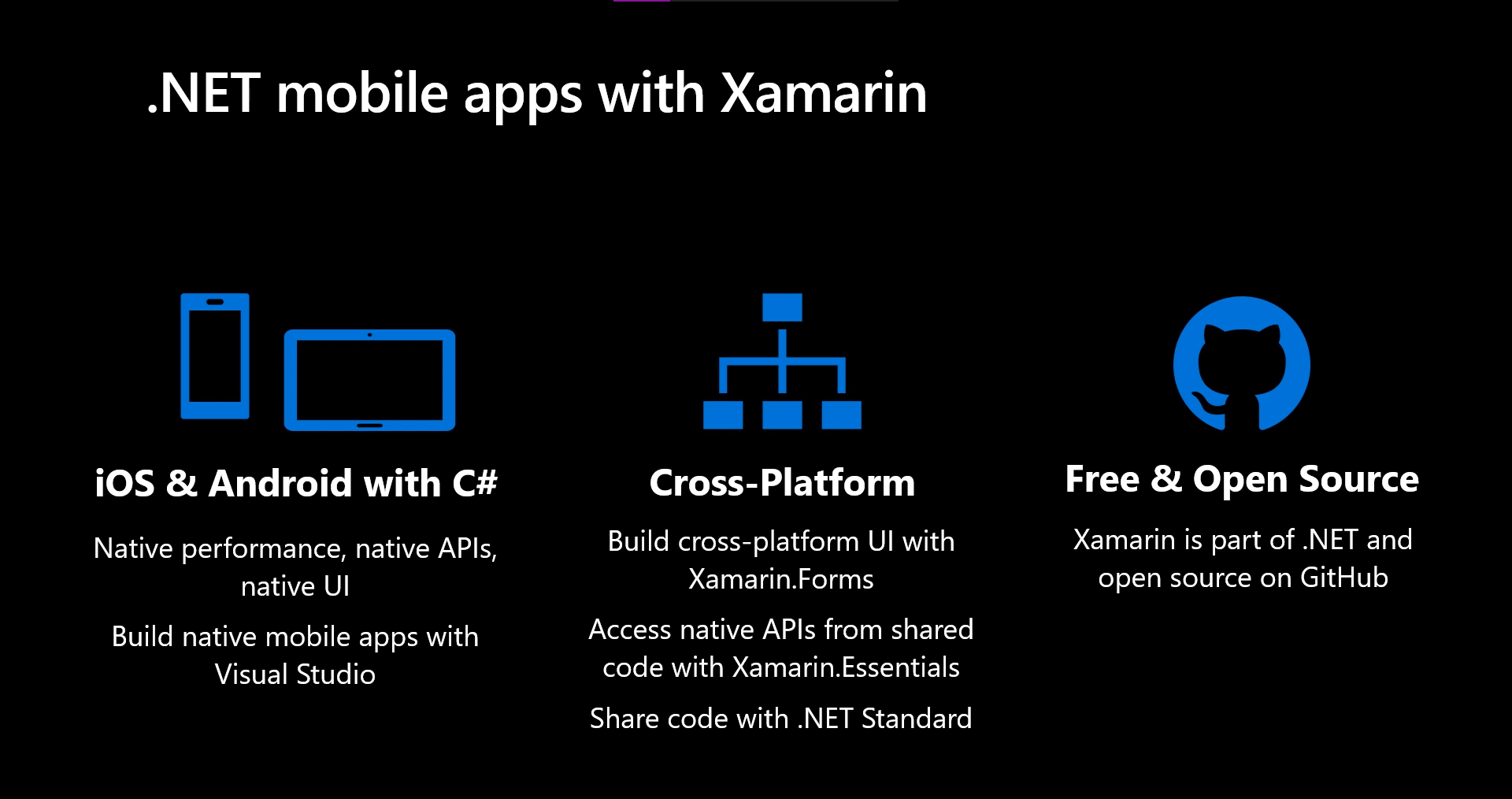 To help with the overhead of creating native UI’s for each platform, we have Xamarin.Forms.

Xamarin.Forms is an open-source UI framework that allows you to combine the code for Xamarin.Android, Xamarin.iOS, Xamarin.Mac, and Windows applications into a single shared codebase.

What is Xamarin.Forms (source: Microsoft)

Microsoft aims to create a unified .NET platform that can replace .NET Framework, .NET Core, and Xamarin. .NET MAUI is the next step in unifying .NET by replacing Xamarin.Forms. It addresses some of the issues and downsides of Xamarin.Forms, while providing an updated architecture on top of the new generation of .NET and project system.

What about my Xamarin.Forms skills and applications?

Think of .NET MAUI as a new version of Xamarin.Forms. Microsoft has assured us that our Xamarin.Forms skills are transferable.

Xamarin.Forms developers will hit the ground running with new projects in .NET MAUI, using all the same controls and APIs they have grown to know and love. – source

There will also be tools and guidance to help migrate applications. The team expects to have a version of the .NET Upgrade Assistant that it can migrate Xamarin and Xamarin.Forms projects to .NET 6 and .NET MAUI in the July 2021 Preview 6 release.

What is different about MAUI?

If we already have Xamarin.Forms, what is so special about .NET MAUI? Microsoft is rebuilding the core of Xamarin.Forms, bringing us performance improvements, consistent design systems, and an extension from mobile to desktop.

.NET MAUI allows us to have a single project experience instead of one project for each target platform. A single project improves the developer experience by enabling developers to target and debug different devices without switching between projects or navigating the idiosyncrasies of each platform. We can use one language across our application to target all the supported platforms and easily share resources across them while maintaining an option for platform-specific code.

Hot reload increases productivity for .NET developers, allowing instant updates to running applications with new code changes. By removing the build and deploy interruptions, it saves time and allows the development flow to continue. In .NET, they are expanding Hot Reload, bringing complete support to .NET MAUI along with other workloads.

The Model-View-ViewModel (MVVM) and XAML pattern used in existing Xamarin.Forms applications will continue to be supported and improved with the evolution. .NET MAUI will introduce further support for the Model-View-Update (MVU) development pattern, popular in C#, enabling developers to write fluent C# UI and create a code-first development experience.

During Microsoft Build 2021, Microsoft announced the availability of .NET MAUI Preview 4. Each preview provides us with more features and tools with general availability scheduled for November 2021 at .NET Conf.

With the release of Preview 4, you can now create functional applications across all supported platforms using .NET MAUI. In addition, they have added new capabilities to support running Blazor on desktop using .NET MAUI, allowing the reuse of Blazor UI components across native desktop and web applications. To see what is coming in future releases, visit the MAUI product roadmap.

How can you get started?

Before you get started, Microsoft has created a dotnet tool called maui-check that evaluates your system for development in .NET MAUI. The tool will scan for the required dependencies and try to fix any issues for you or suggest a way to fix them yourself.

Once you have the complete .NET MAUI development environment setup, you can create your first app by running:

Congratulations! You have a new .NET MAUI application. Check out the getting started page to learn more about using .NET MAUI.

Ace your System Design Interview and take your career to the next level. Learn to handle the design of applications like Netflix, Quora, Facebook, Uber, and many more in a 45-min interview. Learn the RESHADED framework for architecting web-scale applications by determining requirements, constraints, and assumptions before diving into a step-by-step design process.